Ride for Jim At The Meadow Event Park 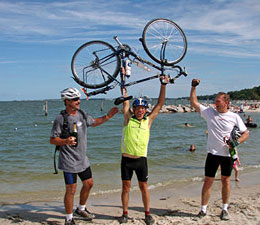 The seventh year of RideforJim was a gran fondo event to help raise funds for the VCU Massey Cancer Center. The course covered the rolling country roads surrounding historic Hanover County with The Meadow Event Park pavillion serving as the launch point.

A 60-mile metric century and a 100-mile century loop ride were both offered. After the ride and enjoy live music, barbeque, and refreshments. This fun-filled event recognized past and present riders as well as our top fund raisers and sponsors for 2014. 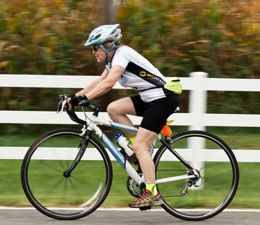 On July 31, 2013 two local Richmond cyclists, Jack Haar and Howard Smith, completed their Trans America RideforJim from Seattle, Washington to Yorktown, Virginia. They set out from Seattle on June 2, 2013. The purpose of their ride was to raise funds for the James D. Popp Summer Research Fellowship, and to highlight the need for increased funding to support cancer research.

This route took them across Washington, Idaho, through Glacier National Park in Montana, across North Dakota, down through Minnesota, south along the Mississippi into Iowa before heading east through, Illinois, Indiana and on to Ohio.

In Ohio they rested for six days in Jack’s little hometown of Elmore near Toledo. Finally they headed south-east through Ohio to Pittsburgh, PA where they were joined by four friends from Richmond who rode the Great Allegheny Passage (GAP) rail-trail from Pittsburgh to Cumberland, MD and then on to the C&O towpath into Washington D.C. After that it was just a short jaunt from DC down to Richmond. To complete the “sea to shining sea” journey, Howard and Jack rode to Yorktown together on July 31st.