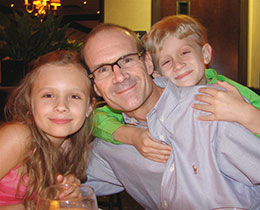 In the summer of 1983 Jim was hired to work in Dr. Jack Haar’s research laboratory at the Medical College of Virginia, Virginia Commonwealth University. Jim had just graduated from the University of Richmond. He was a bright-eyed young man, eager to work hard in the lab and learn all he could about the ongoing research. The lab was focused on understanding the development of the immune system to develop therapies that might help correct errors that occur in various conditions.

Jim quickly meshed into the group of graduate students working in the lab. In addition to being very bright he was a gifted athlete. As a result, experiments were often timed to schedule the incubation period around noon so he and Dr. Haar could go off to the gym for a game of squash or racquetball while waiting on lab results. Jim usually won, but if asked how the game went he would manage to make it sound as if it was a close match or that he had learned from his opponent. 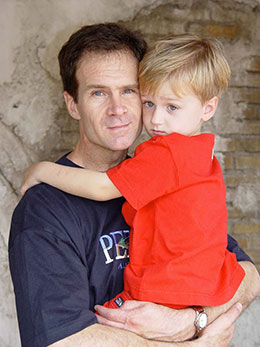 He applied to the medical school and was accepted the next year but continued working in the lab throughout his medical training. During that time Dr. Haar was involved in a collaborative research project with Dr. Leonard Schultz at the Jackson Laboratory in Bar Harbor, Maine. It required him to spend part of the summer of 1984 in the lab in Maine. Jim accompanied Dr. Haar and his family on the trip. In the process he bonded with Dr. Haar’s two sons who were 7 and 10 at the time. While his wife, Nancy, prepared dinner, Dr. Haar and the boys and would run with Jim in the evening. After the run they would eat together at their cottage enjoying lobster and good conversation.

The next year Jim was hired again to work on the project at Jackson Lab for the whole summer and his efforts resulted in a couple of research publications. He was the star of the Jackson Lab baseball team, and lived with a number of other summer students at “High Seas”, an early twentieth century ‘cottage’ which is actually a huge mansion overlooking the sea. He would often remark that it was one of the best summers of his life.

Jim graduated from medical school in 1988 and went off to do a residency in Internal Medicine at the University of Florida ultimately specializing in Rheumatology. He married Barbra Spengeman whom he met as a fellow medical resident in Anesthesiology. Over the next nine years they were blessed with five children: a daughter Nicole and four sons, Brent, Reed, Kyle and Grant. 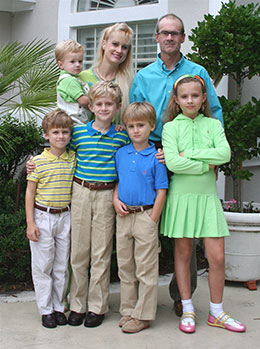 In the early spring of 2006 Dr. Haar hosted a reunion of the group that had been in his lab in the mid-1980’s. Along with the others, Jim was invited to come for a weekend in April. Jim was excited about the prospect of seeing the “lab bunch” after several years and was eager to see if he could arrange a trip around his family’s busy schedule.
Several weeks later Jim was diagnosed with a high grade malignant sarcoma in his hamstring. Due to the start of chemo and radiation treatment he would not be able to attend the reunion. He exchanged email messages with Dr. Haar over the next year and a half, and Dr. Haar and his wife went to Florida in February of 2007 to see Jim and his family.

In May of 2007 Jim and his brother, Mark, flew to Boston for a consult with a doctor at Dana Farber Cancer Center. Due to inclement weather all flights out of Boston were cancelled when they were schedule to fly home. They would not be able to leave by plane for three days so they decided to rent a car and drive back. At exactly the time that they were passing through Fredericksburg, Virginia, Dr. Haar called Jim on his cell phone just to check on him. Learning of their trip, he quickly arranged for them to stop at his house and immediately left work to meet up with them. They spent that afternoon together and Jim was in high spirits. Later that day they were successful in finding a flight out of Richmond. In all of their conversations after that they marveled at the miracle of Dr. Haar calling at exactly the moment they were only 30 minutes from Richmond. It was the last time they would see each other. Jim passed away August 25, 2007 at age 45.

Jim was an amazing person. He pushed himself to succeed and to do his best at everything. He was an incredible athlete at tennis, baseball, squash, racquetball, running and any other sports he attempted. Jim was very competitive, but only to see how good he could be, not in a mean-spirited way to defeat his opponent. He always had a smile and kind comment for everyone. His first love was his family, but he was also a dedicated physician. Jim was devoted to his patients. All of them adored him, as testified by the pages and pages of condolences posted by them. Throughout his illness and endless treatments he continued seeing his patients for half days, including the morning the day before he died. That was the kind of dedicated caring human being Jim was.

James D. Popp was a dear friend, a trusted physician, and most of all a beloved father and husband.